The University is pleased to announce the establishment of a new professorship to advance research in the field of polar environmental science, thanks to a generous endowment by Viking.

By establishing the Viking Polar Marine Geoscience Fund, we are also ensuring that the Scott Polar Research Institute is able to continue critical work in perpetuity.

The Viking Polar Marine Geoscience Fund will endow the Viking Chair of Polar Marine Geoscience, the first fully funded professorship based at the Scott Polar Research Institute. This new post will enhance the scientific leadership at the Institute and enable the development of new lines of research into the past, present, and likely future behaviour of polar ice sheets, sea ice and ocean circulation.

The partnership will also see scientists from the Scott Polar Research Institute join Viking’s new expedition voyages to Antarctica and the Arctic to conduct fieldwork and share their expertise with guests during lectures and other interactive experiences.

Viking Expeditions launched in January 2022, with the first of two new purpose-built vessels, the Viking Octantis, sailing her inaugural season in Antarctica. The second, identical ship, the Viking Polaris, will debut in summer 2022. Both ships have a well-equipped science laboratory for use by teams of scientists and experts engaged in a variety of scientific projects relating to environmental change in the Polar Regions.

The 380-square foot Science Lab on board each ship has been developed in consultation with Cambridge University and Viking’s other academic partners to support a broad range of on-board research activities. Scientific equipment will also be deployed from smaller boats launched from the parent ships. Guests will be given supervised access to the Science Lab to learn about and participate in research, as well as have the opportunity to assist in fieldwork.

Viking has pledged that its expedition ships will minimise environmental impact and meet the most stringent emission and biosecurity standards.

Commenting on the new partnership a representative from Viking said:

“Our intention in creating ‘the thinking person’s expedition’ is that every voyage should provide opportunities for scientific discovery—for our guests and for our partners,” said Torstein Hagen, Chairman of Viking. “In addition to offering our guests the ability to explore some of the world’s most pristine destinations in comfort and in the most responsible way possible, we are proud that our expedition vessels can also be utilized as ships of opportunity for important research that might not be possible otherwise. By establishing the Viking Polar Marine Geoscience Fund, we are also ensuring that the Scott Polar Research Institute is able to continue critical work in perpetuity—some of which will be conducted on board.”

Established in 1920, the Scott Polar Research Institute’s mission is to enhance the understanding of the Polar Regions through scholarly research and publication, educate new generations of polar researchers and communicate the history and environmental significance of the Polar Regions to the wider community.

"We are delighted with the support offered by Viking through both the endowment of a new Professorship in the Institute and the opportunity to use their expedition ships as well-equipped platforms for our scientific investigations of the icy world." 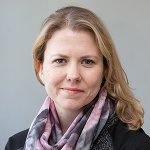 Director of Development — Schools and Institutions