Why I’m backing Black access campaign Get in Cambridge

I want to show that we are not (and don’t have to be) exceptions to the rule, which is often the impression created in the press by uninformed commentators

Finance high flyer Iain Drayton is used to the pressures of life as a partner in one of the world’s leading banks, but there is still one thing guaranteed to make his blood boil.

“I experience a visceral reaction when people criticise Cambridge’s diversity record in the media – lobbing grenades from the sidelines without any appreciation of the statistics, and with no suggestions about how to increase the number of applicants and overall representation,” he says.

“Taking pot shots from a distance is fine, but unless you’re actually going to do something constructive it benefits no one.”

"There are not enough people applying"

Drayton, who is mixed race and attended William Hulme’s Grammar School in Manchester, points to the fact Cambridge admits a third of Black students in the UK who achieve A*A*A, the minimum A-level grade offer, a statistic often lost in the media noise around Oxbridge’s record on admissions.

Last year, the Trinity Hall alumnus, who is now Partner, Managing Director at Goldman Sachs, decided to do something about it himself.

The lightbulb moment for him was at a Global Cambridge event in Hong Kong, where he is based.  There, he got talking to fellow alumnus Mark Lewisohn about some people’s response to hearing where he went to university.

“When I say I went to Cambridge, I occasionally get a ‘Oh well done you’ reaction from some people,” Drayton admits.  “There seems to be an implicit assumption about me being some sort of exception to the rule.

“This made me think about how I could help to increase Black and minority ethnic (BME) representation to address this imbalanced view.  Whilst the ‘conversion rate’ is high for those who achieve the grades, the problem is that the denominator is too small.  There are not enough people applying.

“We also need to recognise that many BME students may be in environments which for various reasons discourage or deprioritise academic ambition.

“So the idea, simply put, is to try to appeal to more young students with strong academic potential whose teachers, whose friends, or perhaps even whose parents aren’t particularly constructive or supportive when it comes to encouraging them to apply to Cambridge.

“Without any external encouragement it’s easy to think, ‘Well, why should I apply?’”

After the conversation, he emailed Lewisohn, who is Deputy Chair of the University of Cambridge council, with the ‘crazy idea’ of a new film series.

“I thought ‘Why can’t we listen to how excited people are about being at Cambridge?’ - that’s much more in line with my experience,” Drayton says.

“I wanted to find 10 or 20 exceptions to show collectively we’re not the exceptions; but we are in fact the rule.  I thought that would be very powerful.”

Together with Christ's alumnus Soumen Das, he pitched the idea for the series to University of Cambridge Senior Pro-Vice-Chancellor Professor Graham Virgo, who took the idea forward.

The resulting Get In Cambridge campaign was launched in May this year, with a series of social media films featuring current Black students, who talk about their experiences of Cambridge, and urging others to apply.

Presented by YouTube influencer and Robinson alumna Courtney Daniella, more than 110,000 people have watched the films, and over 500 subsequently clicked to book a Cambridge Open Day place.

The films are aimed at students of 'under-represented' ethnicities at Cambridge (which also include those from British Bangladeshi and Pakistani communities), some of whom may be put off by false perceptions that Cambridge is too expensive, that they won’t ‘fit in’, or (again in contrast to the statistics) that the University ‘excludes state school students’.

According to research carried out for the campaign, these perceptions can act as insurmountable barriers to applying, especially if combined with difficulties in accessing support or advice on how to apply.

Looking for those with the greatest potential

Drayton acknowledges that he was fortunate to attend a school with some diversity, and a history of sending a few students to Oxford and Cambridge each year. “For me, the idea of going to Oxbridge was there from an early age. My parents and teachers were very encouraging. They wanted me to perform academically and I was pretty driven.”

Now he is helping those who don’t have access to the same opportunities.

“In banking, just as in academia, we are always seeking to attract highly capable individuals; but the struggle to find genuine and original talent is real.

“For universities like Cambridge it’s becoming as difficult as it is imperative to find those exceptionally talented students… who perhaps may not have had access to the same quality of educational opportunities as some, but who deserve to be there just as much.

“At Goldman Sachs one of our Business Principles specifically focuses on diversity.  ‘For us to be successful, our men and women must reflect the diversity of the communities and cultures in which we operate.  That means we must attract, retain and motivate people from many backgrounds and perspectives.  Being diverse is not optional; it is what we must be.’  The goal has to be to reach as far and wide as humanly possible to find, to access and to recruit those with the highest potential.”

He hopes using current Cambridge students as role models will send out a strong message.

He says: “I’m hoping this sort of initiative can help to fill a void where perhaps young people with raw talent are not being encouraged to apply by those around them.

“If they can see a bunch of people like themselves at Cambridge, whether they’re of different ethnicities, different religions, or different socio-economic backgrounds, then they can see there is a way to get to Cambridge and benefit from some of the best teaching in the world.”

Drayton insists the initiative is not about lowering standards, but attracting talent in greater numbers, something he expects Cambridge to benefit from as much as its students.

“Diversity is a term we often hear used, but to me that means bringing different perspectives to bear… to open up how we think about issues and problems, and how we get to the answers.

“At university, I learned a lot from talking with people who were doing other subjects, and from listening to how they approached things.  So for me having people from different backgrounds has to be the basis of bringing different perspectives to bear, and to drive new, original and innovative thought.”

Putting an end to myths about Cambridge

He points to his surprise at learning how pervasive myths about Cambridge’s attitudes to diversity are. So, did he never experience racism while at Cambridge?

“I think it would be naïve and disingenuous to say that it didn’t or doesn’t exist, and/or that I never experienced it… but certainly no more frequently or explicitly than I have ever felt anywhere else.  What I can say definitively, however, is that I never felt isolated.  I never felt victimised.  The environment at Cambridge is at least as good, if not better, than most other academic institutions.  It’s a very privileged and protected environment, which means that once you are there, you have every opportunity to flourish.  It’s pretty difficult to understand why that wouldn’t be appealing!” he says.

“I had a great time at university. I was reasonably academic - people would probably say that I studied pretty hard.  But that was my choice.”

Drayton believes that alumni have a role to play in spreading a positive message about their Cambridge experiences. “We should all be ambassadors. We can be part of shaping the public narrative to be more positive about Cambridge.

“Imagine the impact if people could hear what an amazing time you could have at Cambridge and  what fantastic things it is doing, instead of all the negative sensationalism that we read in the press.”

He praised Vice-Chancellor Professor Stephen J Toope for “leading from the front” in promoting Cambridge as a world leader in teaching and research.

But, Drayton cautions, there is still a risk that Cambridge may fall behind its competitors.

“Academic institutions in the UK cannot raise money fast enough to retain the best teaching talent and to attract the best students; and the government isn’t doing enough to help.

“Oxford and Cambridge should be national treasures, but unless more is done their financial situation is likely to get worse before it gets better.  In my profession l am surrounded by graduates from the US Ivy Leagues, whose endowments dwarf anything that might exist in the UK.

“That is why alumni giving is so critical, and will become more so… and why it’s incumbent on any and all of us who have the financial wherewithal to support Cambridge.

“Even small amounts add up over time - if every graduate donated just a pound a year, think about what that could add up to.”

Drayton is keen to support the Get In Cambridge campaign over the next few years, not least so he can see his workplace populated by more diverse graduates over time.

“Cambridge is an absolute life changer.  You gain a lot of self-confidence from going there,” he admits.

“To this day it doesn’t matter what environment I’m in, whether it’s professional or private, when people find out you’ve been to Oxbridge they do treat you differently – maybe it shouldn’t be the case, but it is.”

His hope for the campaign is that together with a wide range of access initiatives, including the introduction of a transition programme, it will change Cambridge life – and his own.

“I’d like to no longer be seen as the exception to the rule.  If we can increase the number of applicants, we will create new rules, turning the whole thing on its head.”

Alternatively, find out about supporting students or visit your College's website to see how alumni can help. 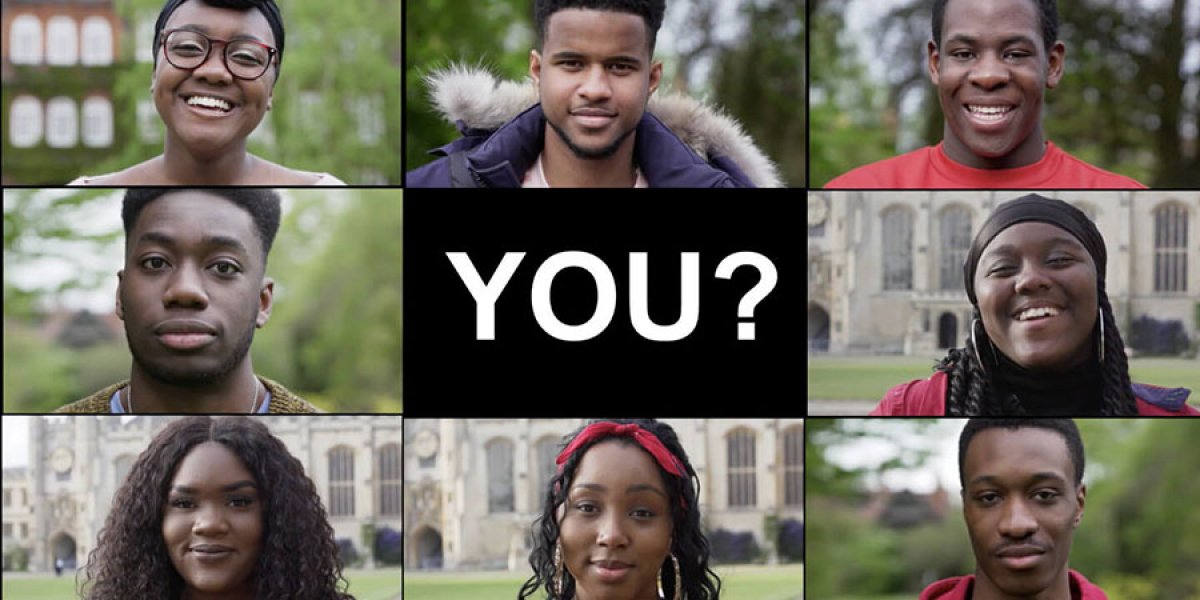