Designed to support and promote underrepresented groups in mathematics, the recipients so far are all women mathematicians of the highest regards. In the first of a series of interviews, we spoke to the philanthropist whose generous six-figure donation has made the project possible: Dr Ewan Kirk.

What is the purpose of the Kirk Distinguished Visiting Fellowship scheme?
There’s a traditional underrepresentation of women and other groups in mathematics. The Newton Institute is a fabulous place and literally world-leading at what it does, but it can’t change this fact. Consequently, we’ve seen a historical bias towards male programme directors and recipients of the Rothschild Fellowship. I think we can do better. There’s a lot of critically important work being done to address the imbalance at school and university level but it’s also important to have role models that are women at the very peak of their profession. That’s the rationale behind the Kirk Fellowships: to create a prestigious fellowship that will ensure the best possible people have access to doing the best possible things. There’s a lot of history to address and this is a way, perhaps, of short-circuiting and unwinding that history.

What inspired you to give to Isaac Newton Institute for Mathematical Sciences in this way?
I’ve donated to the University in other capacities, and I think the best thing you can say as a donor is “what do you want to do with this? What do you think the best use of this gift is?”. I’m not the expert in the field, so when the conversations began I discussed possible plans with David (Abrahams, Director), Christie (Marr, Deputy Director) and the Management Committee, and it became clear that this was clearly the best use of resources. And so from 2019, each long programme will have a Rothschild Fellow and a Kirk Fellow — two appointments that are designed to mirror each other. In truth it’s really the Institute’s design, I’m just here to enable it. My philosophy has always been to look for the general area and allow the recipient to tell you the best thing to do within that broad space. I’m already amazingly proud just to be associated with INI in general, and I feel that every time I walk in the door.

And what made you choose mathematics over any other science or discipline?
As a philanthropist, there’s obviously an enormous amount of demand out there — from universities to donkey sanctuaries. However, it’s uniquely hard to raise money for mathematics. It doesn’t have the real visceral content of, say, medical charities — which along with life sciences constitute more than half of all the UK’s charitable giving. And the reason for that, of course, is either that people have relatives that are sick, or are sick themselves or are worried that they might at some point require that kind of help. Likewise, many subjects such as astronomy and physics and zoology have the “gee whizz” factor. But for me, it’s very important to support fundamental research: even if there isn’t any indication that there’s any direct relevance at the current time. It may just be an intellectual exercise. Or it might be directly relevant. Or it might be relevant in a hundred years’ time. But unless we do the work now it will never have that chance.

So you’re not concerned with the Kirk Fellows’ research producing results?
It is ok to do things that are not directly applicable to the “real world”, and I’m keen to make it clear that maths can just be a good thing to do for its own sake. And this isn’t unique to mathematics. There’s not a single thing that has come out of the Large Hadron Collider that’s going to make any difference to the world. But it’s a fabulous thing to do. The fact that Big Physics is striving to understand the structure of the universe is fabulously “useless”, and I’m glad there have been billions of dollars spent on it. The science underpinning much of that, of course, is Group Theory, which 100 years ago was equally interesting but not “useful”. People also point to Prime Number Theory — which was as pure as pure can be. It had little or no application. And then suddenly cryptography comes along and it’s critically important. It’s everything.

Have you always had a passion for mathematics?
I was originally a general relativist. I did a degree in Physics and Astronomy, Part III at Cambridge, and then went and did some general relativity as a PhD. And I loved it. I loved the whole concept of discovery. The language of maths. The puzzles in maths. They can totally absorb you. And one of the things that maybe only happened to me twice in my entire, truncated mathematics career was suddenly making a link between two very separate things, which then allows you to use two sets of machinery to attack a problem. That’s a fantastic experience. Especially when you’ve been struggling with that particular problem for a year or more. It’s ground-breaking. And this is coming from someone that’s not very good! Certainly not in any way good enough to be a participant in any of the programmes here. But I was lucky to experience those moments — and to solve problems that literally nobody else cared about apart from me and my PhD supervisor.

But you didn’t choose to stay in mathematical research yourself?
My career took a different route, but I’ve always retained that interest in the mechanics of mathematics. And, of course, I voraciously read popular books and — like all of us — spend a lot of time disappearing down Wikipedia holes and following links. My current job — analysing financial markets — is very statistically rich and challenging. So I’ve kept my hand in as a practitioner. But there’s still a sense of awe at people that can do something that I once had a tiny little insight into, over and over again in a 30-year professional career.

Is there anything that you would like to say to present and future Kirk Fellows?
That’s a good question, and the answer is probably “no”. It’s up to them to make the best of their opportunity. It’s not that I don’t want to be involved. But the recipients of the Kirk Fellowships are the stars. They’re the ones that know what to do and how to do it, how to take advantage of being here at the Institute, doing fabulous research and being surrounded by everyone that is great in that field. That’s all they should be doing: getting as much as possible out of simply being here.

It sounds like you have very high hopes for their participation.
Absolutely. Take the example of Andrew Wiles and Fermat’s Last Theorem — his proof of which was announced at the Institute not long after its founding in 1993. It’s an incredible human interest story, but things of equivalent importance and equivalent brilliance are done every year at this Institute.

Dr Ewan Kirk is the co-founder of Cantab Capital Partners and the Chair of Isaac Newton Institute (INI) Management Committee. He is a long-term supporter of the Institute, with this recent £250,000 donation being the latest in a number of philanthropic gifts made by the Turner-Kirk Charitable Trust.

This interview first appeared on the INI website on 28 February 2019.

To find out more about how you can support the Isaac Newton Institute for Mathematical Sciences, please contact: 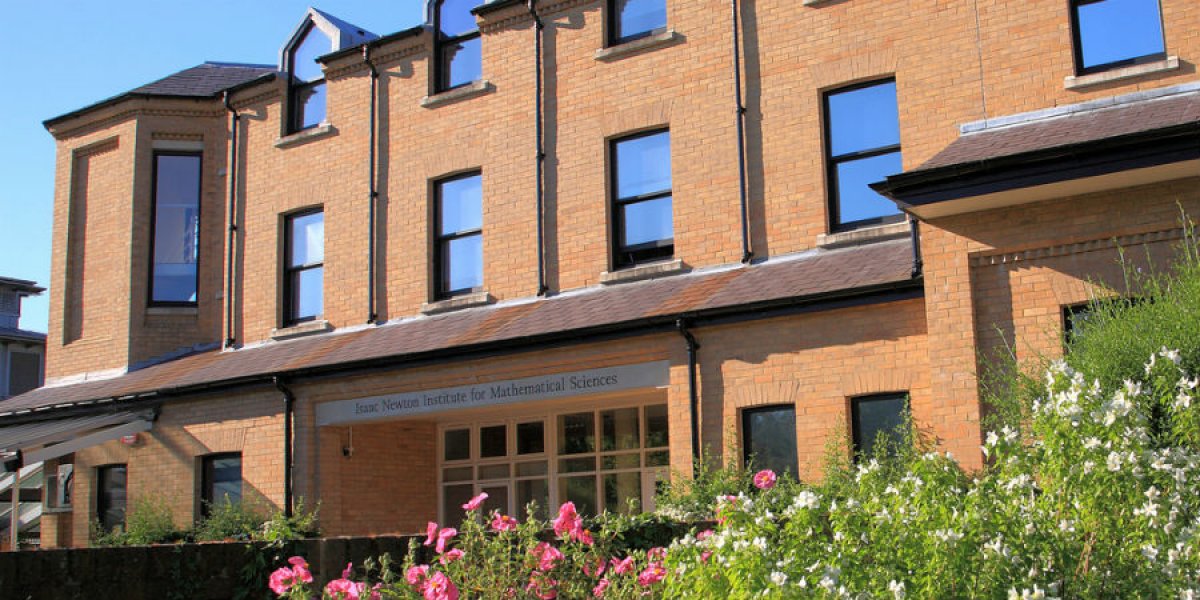 The Isaac Newton Institute is the UK's national research institute for mathematics.